Oakland residents are invited to Eastmont Mall August 22-23, 2020, to attend the largest COVID-19 testing event ever staged in the East Bay.

Umoja Health, a network of doctors in San Francisco, and Oakland Frontline Healers anticipate that more than 1,000 people per day will be tested via drive-thru or walk-up at 7200 Bancroft Ave.

From 10:00 a.m. to 6:00 p.m., testing will be available, and free lunch and free PPE will be distributed to participants. Previous COVID-19 events of this size were successfully staged in May and June in San Francisco’s Sunnydale and Bayview districts, led by Dr. Kim Rhoads. 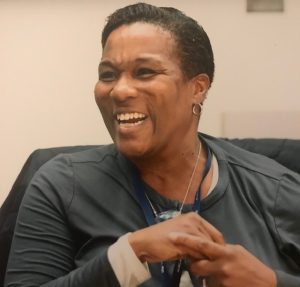 Rhoads, who is formally trained and board-certified in general surgery and colon and rectal surgery, is currently an associate professor of epidemiology and biostatistics, focusing on cancer research regarding higher death rates among African Americans, even those cancers they are less prone to develop.

The situation caused her to reflect on the philosophy of her mentor, Dr. Frank E. Staggers Sr.

Staggers, who transitioned in 2014, was the founding chair of the Community Advisory Board for UCSF’s Helen Diller Family Comprehensive Cancer Center.

Staggers had a strong belief in unlimited human wealth and potential. He promoted strong family values, including the belief that elders must provide a foundation for the next generation to reach its highest promise, and that “family” incorporates the entire community.

Linking the health of an individual with the health of the community was what Staggers practiced, dedicating himself to identifying and developing strategies and solutions to eradicate healthcare disparities.

After practicing surgery on the faculty at Stanford University for nearly a decade, Rhoads decided she wasn’t going to practice anymore, deciding to commit full time to community engagement work.

“When I started medical school I said I wasn’t going to practice medicine.  My purpose was to learn all the secrets of the medical system and tell the people what those secrets are,” she said.

With the arc of her life unfolding in this way and the advent of the COVID-19 pandemic,  Rhoads reflected on her mentor’s principles, asking herself, “What would Dr. Staggers do?”

Rhoads rededicated herself to her life’s mission, leading the effort for the San Francisco COVID-19 testing events and revealing the secret that African Americans are dying at higher rates than any other demographic, and that major intervention is mandatory.

“My department chair at UCSF, Dr. Kirsten Bibbins-Domingo got a call from (Oakland’s) Fruitvale district from Chris Iglesias of the Unity Council and leaders at La Clinica De La Raza who said they had a really big COVID-19 positivity rate and needed our help,” Rhoads said.  “We know the rate in East Oakland is high, so we’ve come to where the need is greatest.”

Rhoads is operating under the umbrella of the United in Health initiatives, which are sponsored by UCSF, and the Chan-Zuckerberg Biohub, a collaboration between UCSF, Stanford and UC Berkeley.

The Biohub runs the COVID-19 testing for select community-based testing initiatives.  Their tests have a rapid turn-around of getting results within two to three days, a criticism that other massive testing efforts have faced.

“After the August 22nd event, we will continue taking care of people who test positive, providing PPE and resources including food delivery, cleaning supplies and instructions as to how to keep their homes safe, by supporting a Community Wellness Team here in East Oakland.”

“The key is, we’re not going to disappear after this event.  We will keep the community wellness teams together and evolve other support as needed.,” Rhoads said.  “If people don’t need food, we’ll provide COVID messaging and other COVID activities, but we’re basically trying to keep local groups together to continue serving the community. After COVID we’ll take care of cancer next.  It’s what Dr. Staggers would do.”

Rhoads said that health disparities in populations of color stem from health system inequities that have existed for decades and began when white Medicare-based hospitals, supported by the American Medical Association, received more funding than Black Medicaid-based hospitals.

Rhoads explained, “It is undeniable that hospitals, that are Medicaid based, vs. Medicare, take care of more and tougher cases of cancer, often because the disease is so advanced at the time of diagnosis.  Academic structures blame the victims for the high rates of death, stating poor health habits, but I have found that the problem stems from disparities in standards of care.”

Rhoads is also an affiliate of Philip R. Lee Institute for Health Policy Studies and associate director of Community Engagement for the Helen Diller Family Comprehensive Cancer Center.  She is married to pediatric anesthesiologist Dr. Bill Rhoads, resides in Oakland, and has two teenaged children.